A few weeks ago I shared a post about the bread making class I took as part of the annual fund raiser for a local private school.  You can view that post HERE.  This past week I took another class in that same fund raising series offered by one of the most talented amazing people I have ever met.  Terry White is a local floral designer that does spectacular decor for wedding and parties.  He had the class in his amazing home, which is more like an art gallery. 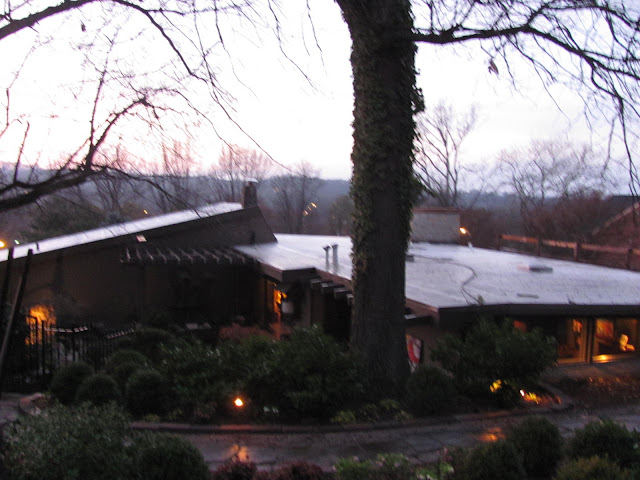 ﻿
He explained to us that the house is all concrete.  It is perched on a slight hill, surrounded by terraces front and back and has a perfect view of the sunset.  It had just stopped raining when we all walked out onto the beautiful back terrace. 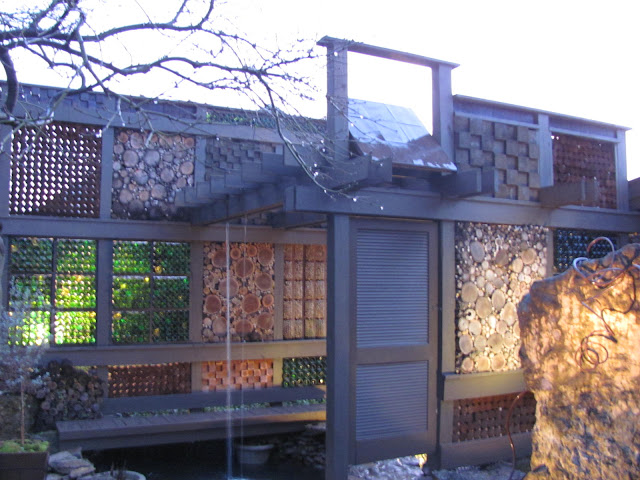 A new home was built next door so Terry built this custom screen.  He modeled it after Hollywood Squares.  Each square contains something different; wood slices, copper, wine bottles and various other things.  Overall, it was a visual delight.  A tiny stream ran below with water falling from above. 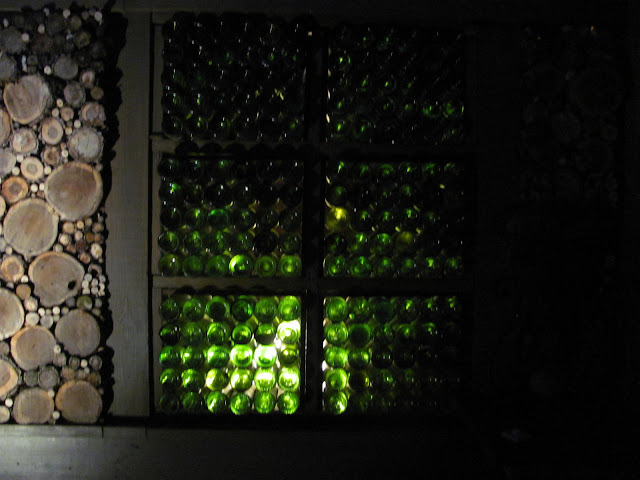 I apologize for the fuzziness, but the sun had set and I didn't want to use a harsh flash.  Terry made this sundial using concrete, leaves and a collection of his old watches to mark the hours. 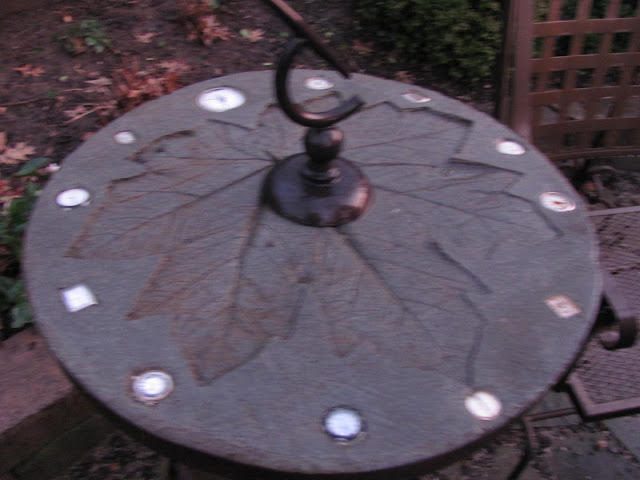 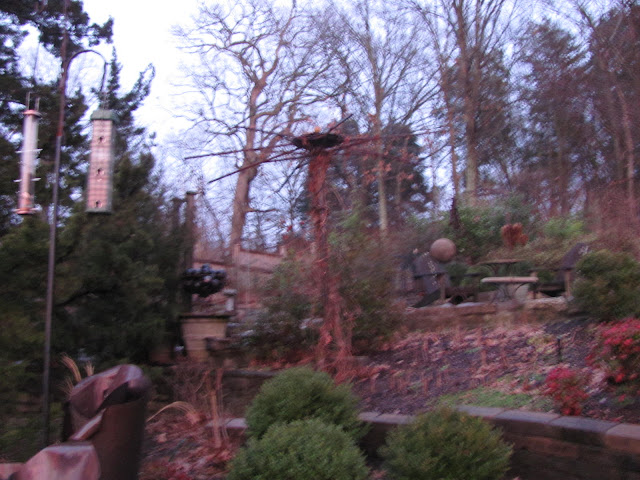 This entire hill side is planted in Annabelle Hydrangeas.  Here you can see the upper terrace. 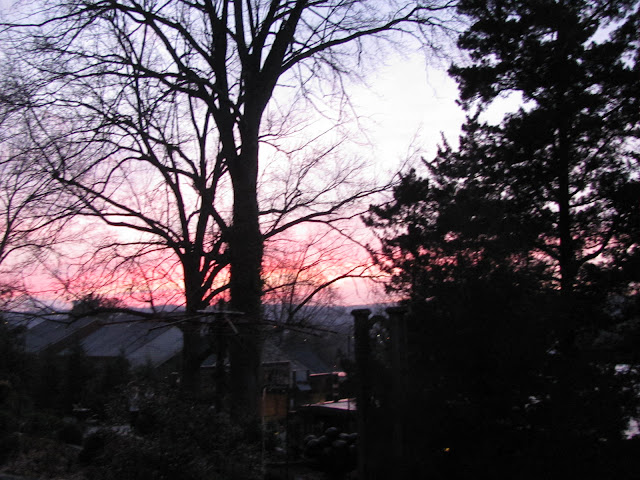 I was working with only a tiny bit of remaining light, but the sky was beautiful.
Inside, Terry showed us to use wine glasses and other simple items to create a casual tablescape.  He only uses natural, real items in all of his scaping, with one exception; artificial grapes.  After catering for several years, I agree.  Real grapes are too difficult to make look good in an arrangement. 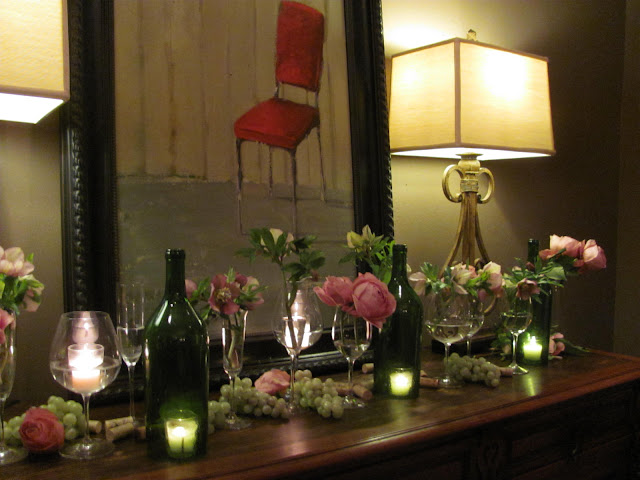 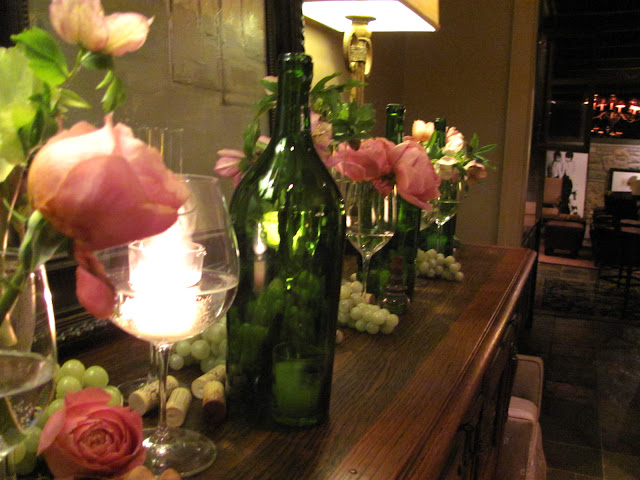 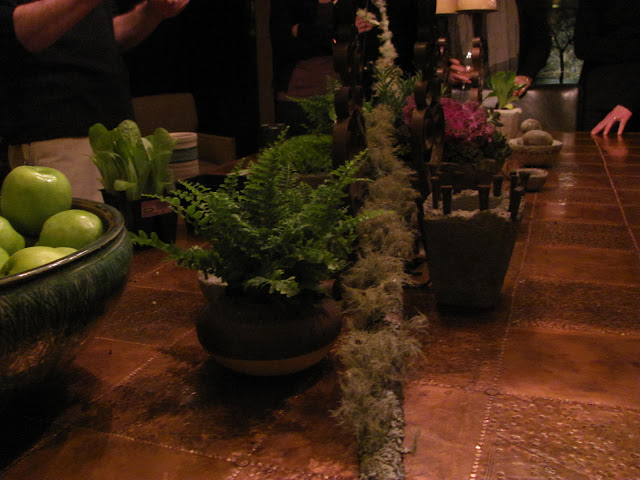 We then moved to the table where he showed us how to use available natural items to create an inviting centerpiece.  The tabletop was custom made by Terry using six inch alternating squares of smooth and hammered copper. 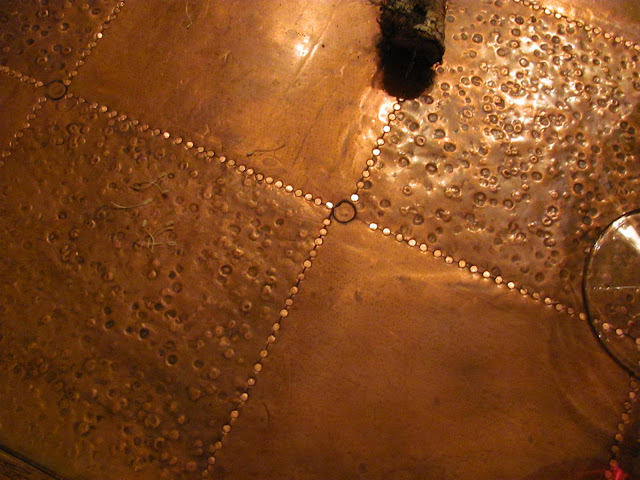 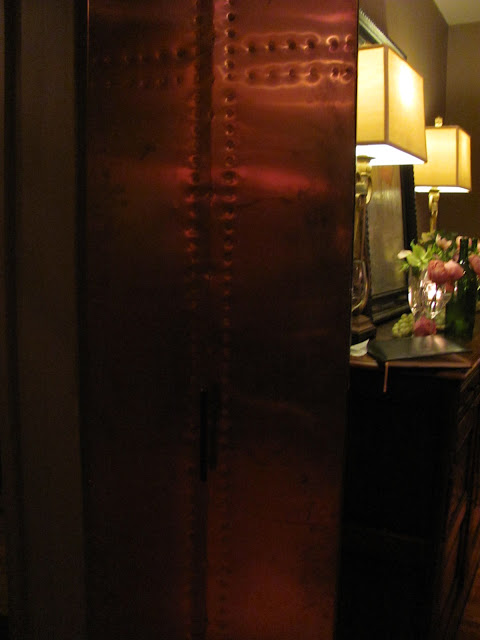 He also made the custom copper doors throughout his house. 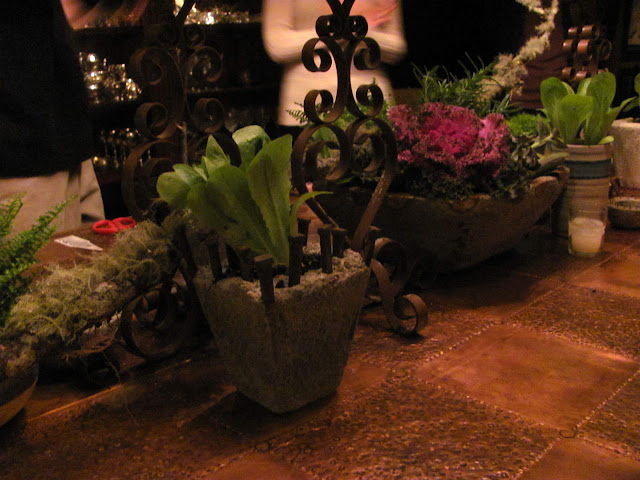 The containers were also hand made using concrete and interesting rusted nails.  All the plantings were found at Home Depot and Lowes. 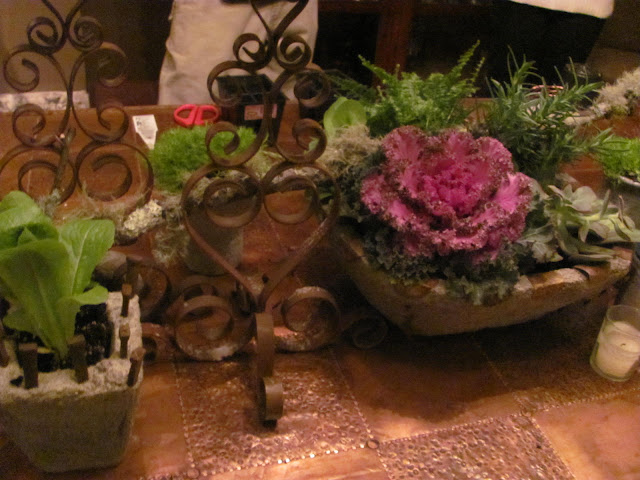 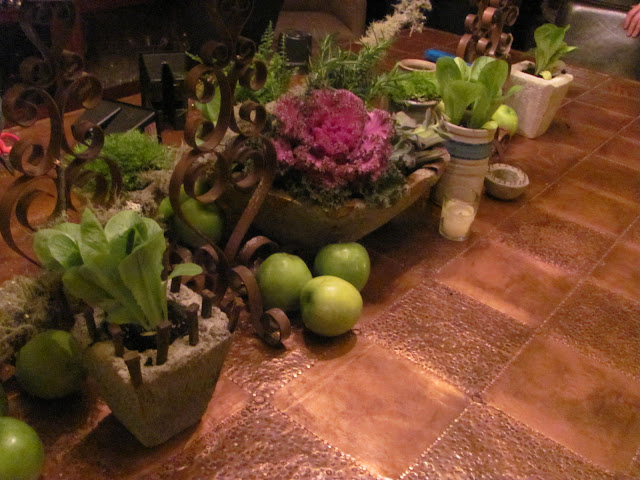 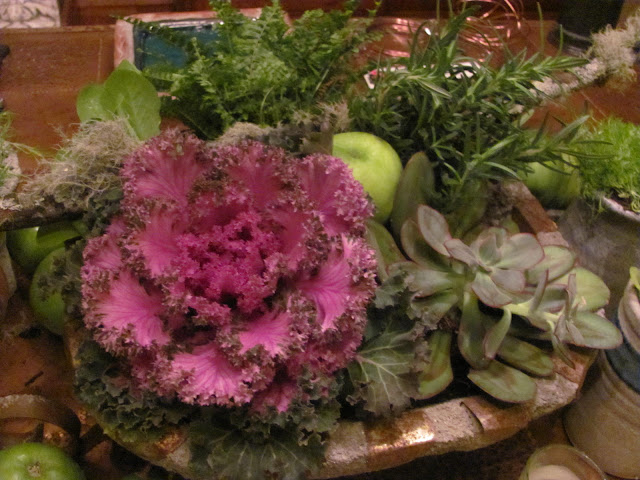 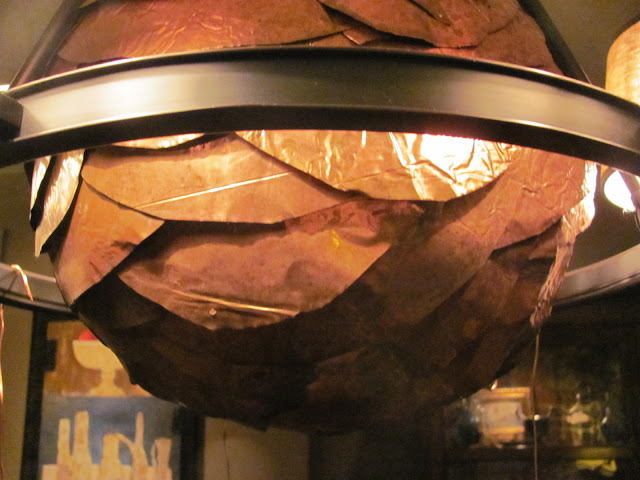 He customized this chandelier with a copper covered orb. 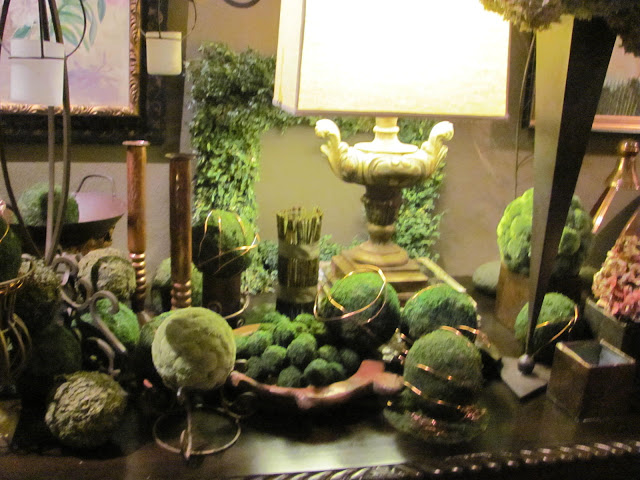 We all joined Terry in the area where he consults with his clients.  When a new clients asks,  'Who is Terry White', he points to this table as a way to describe himself. 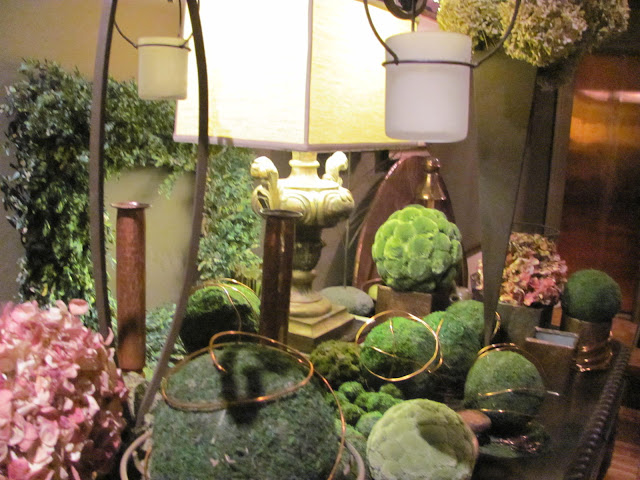 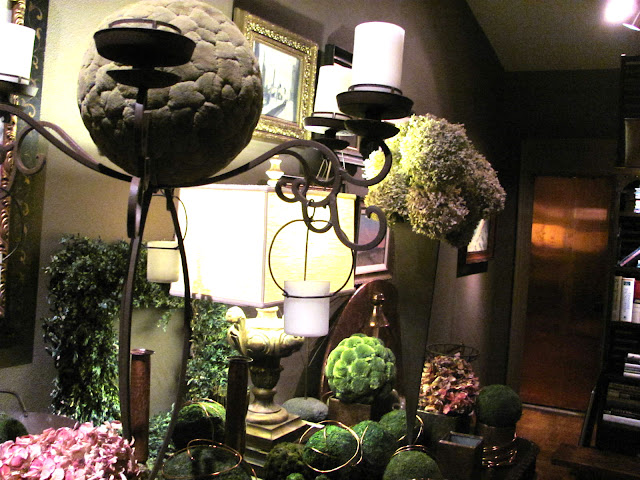 The dried hydrangeas from his hillside were found all around his house. 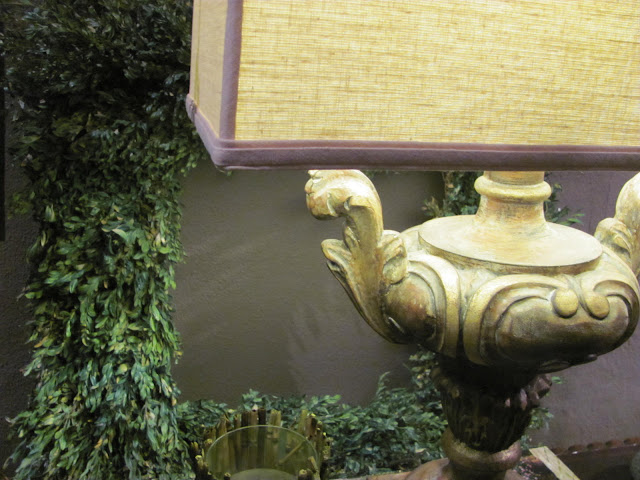 He made the boxwood frame from cuttings and when they started to turn brown, he used several shades of green spray paint to bring them back to life! 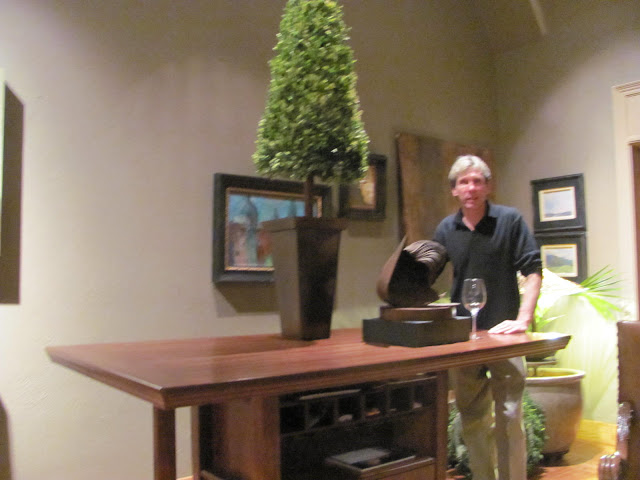 My apologies to Terry for a poor photo of him, but I wanted you to see the blank table that he transformed with a striking buffet centerpiece. 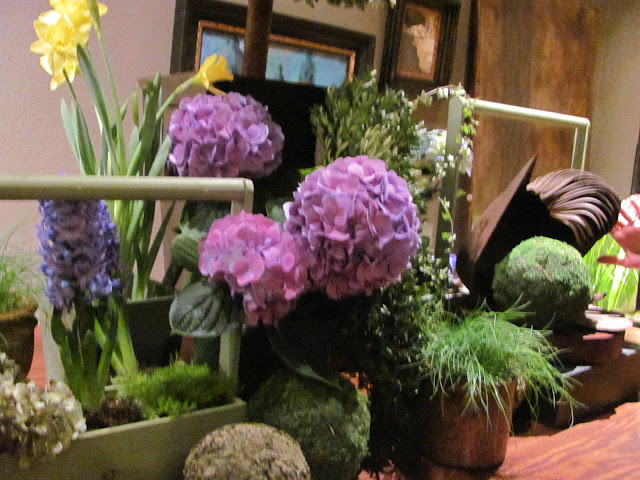 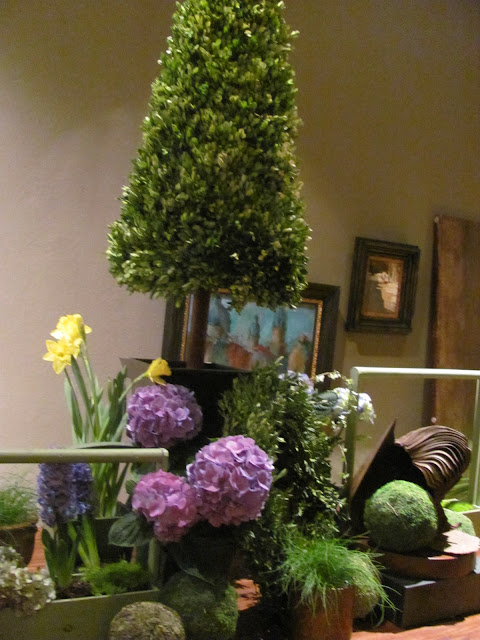 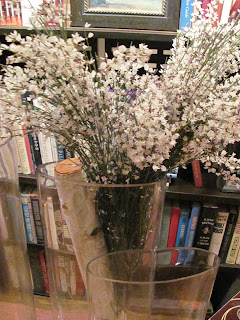 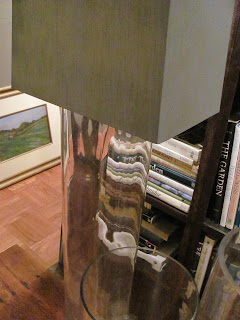 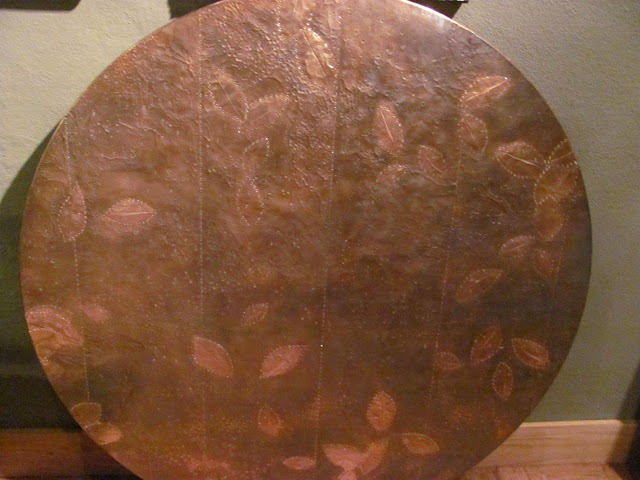 Another table he covered in copper with embossed leaves. 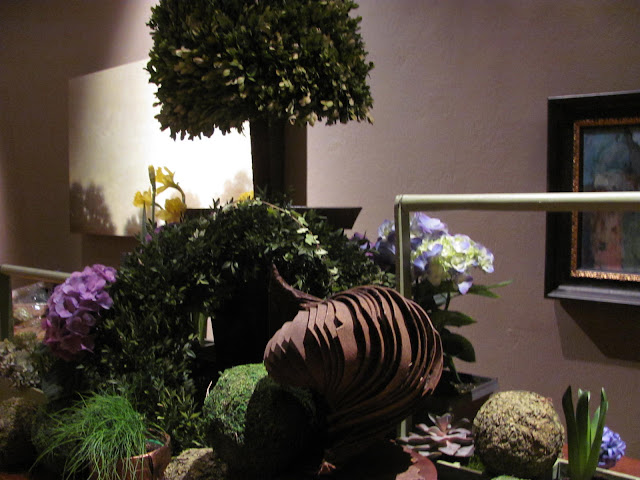 You can visit Terry's website and see photos of some of his amazing events HERE.  You can also link to the blog of another Terry White student from last year's class HERE.  A big thank you to Terry for opening his lovely home and sharing his talents with us.  This will definitely be a class I won't mind repeating year after year.
Linking to Seasonal Sundays, Centerpiece Wednesday and Tablescape Thursday.  Thanks for hosting!
Posted by Dianne at Friday, March 02, 2012