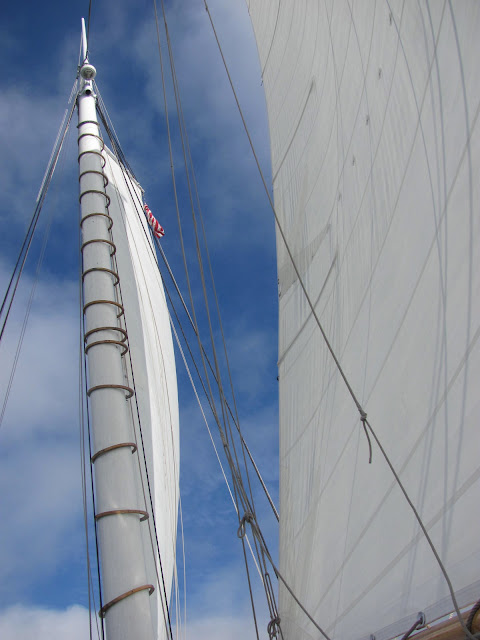 Last February my in-laws invited us on a trip to San Diego.  Of course, we went!  We had a wonderful week of thrifting, antiquing, pawn shopping and sight seeing, but the experience that I can't get out of my head was the whale watching sailing ship. 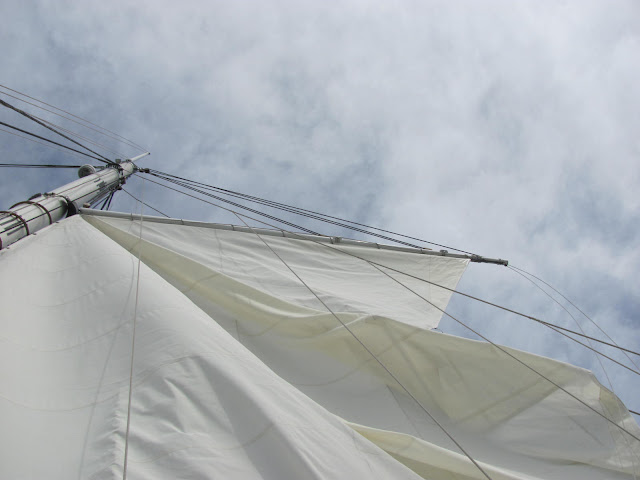 ﻿We knew we wanted to go whale watching and my on-line research revealed that there were several choices.  I was particularly drawn to one offered by the Maritime Museum.  It was a sailing cruise on an 85 foot sailboat. 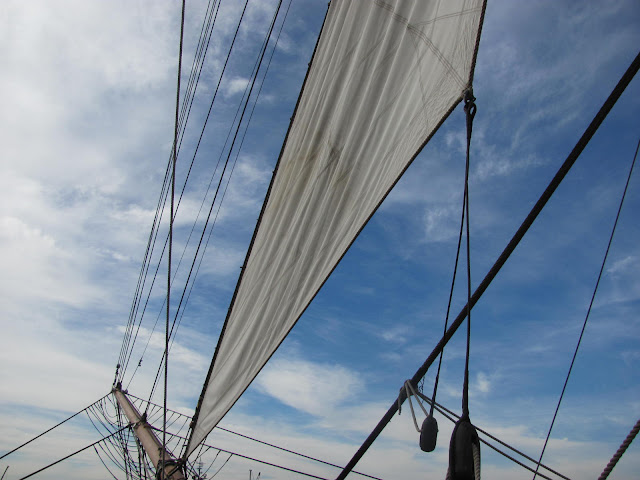 My FIL was very hesitant since he gets motion sickness easily, but after reading on Next Level Sailing's website that they offer a sea sickness guarantee, we all decided to jump on board.  So glad we did!  It was an experience of a lifetime. 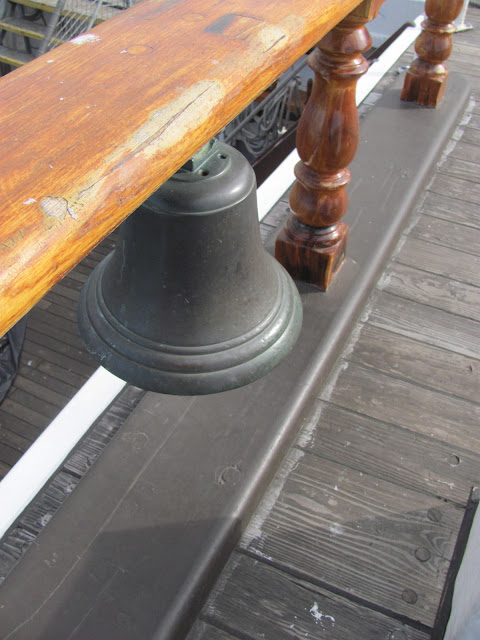 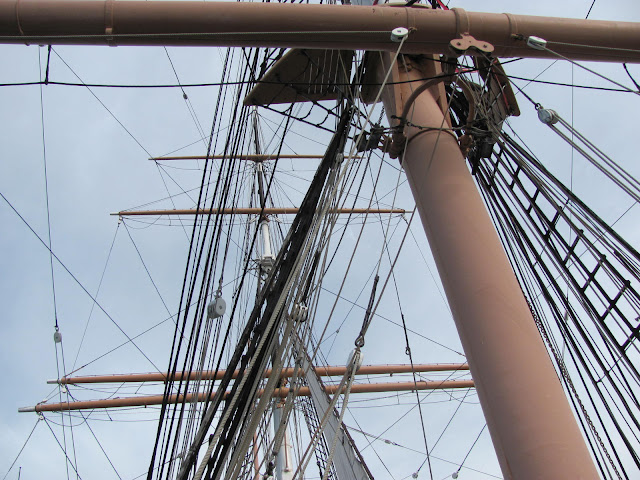 We started our day with a tour of the museum ships in the harbor.  We particularly loved the Star of India. 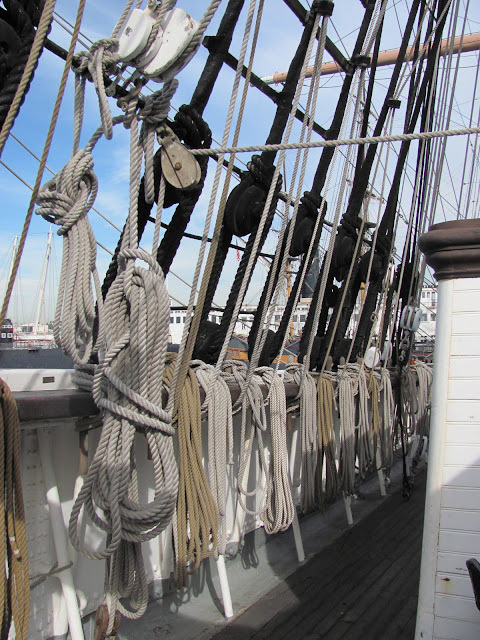 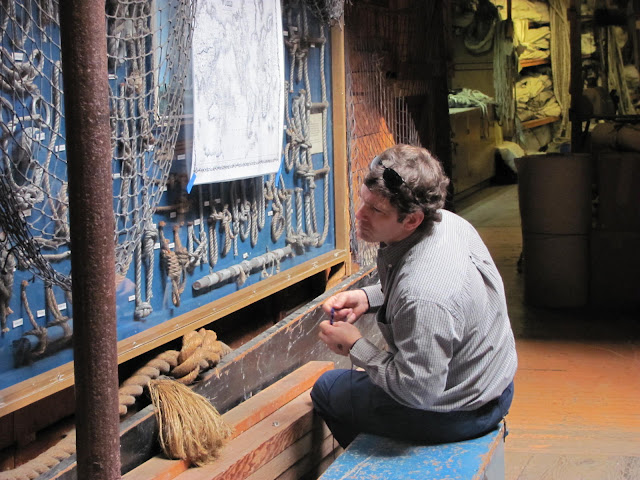 My husband, being an Eagle Scout, was totally taken by the ropes and knots. 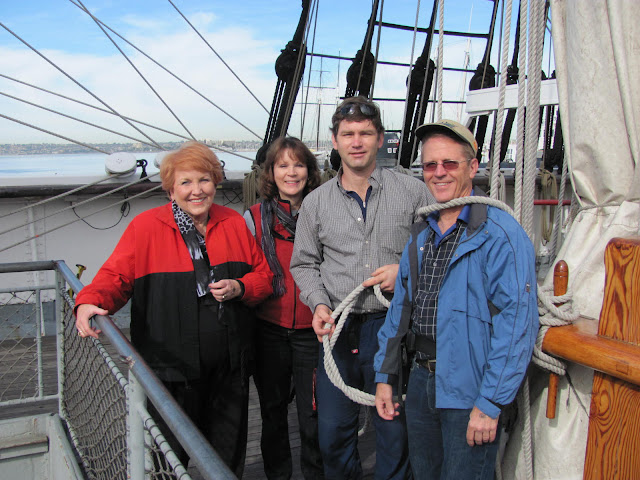 My MIF, not so much! 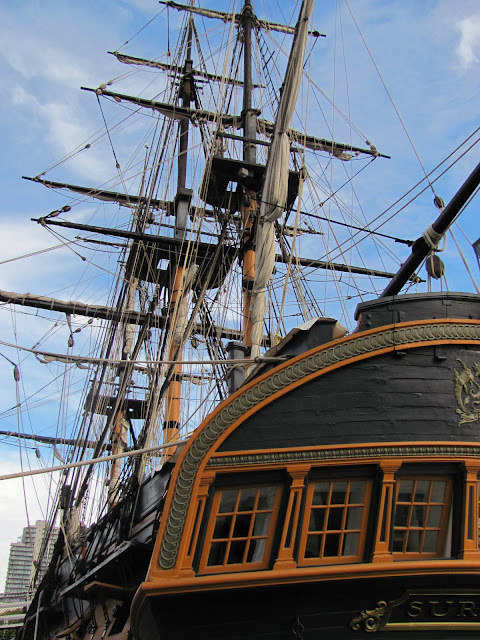 You might remember the HMS Surprise used in the movie Master and Commander: The Far Side of the World. 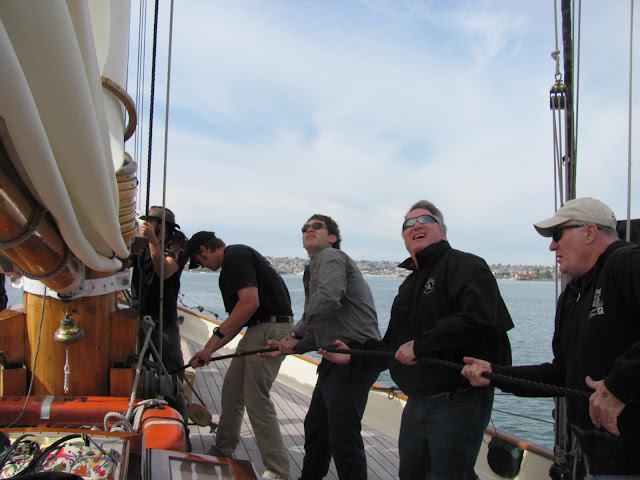 Once we boarded the America, we were all put to work raising the sails. 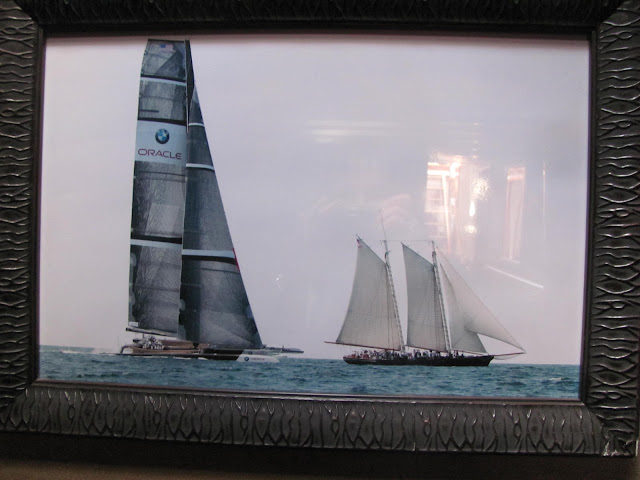 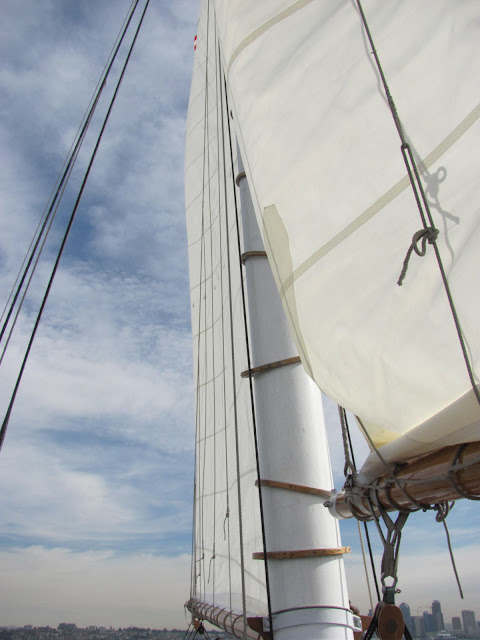 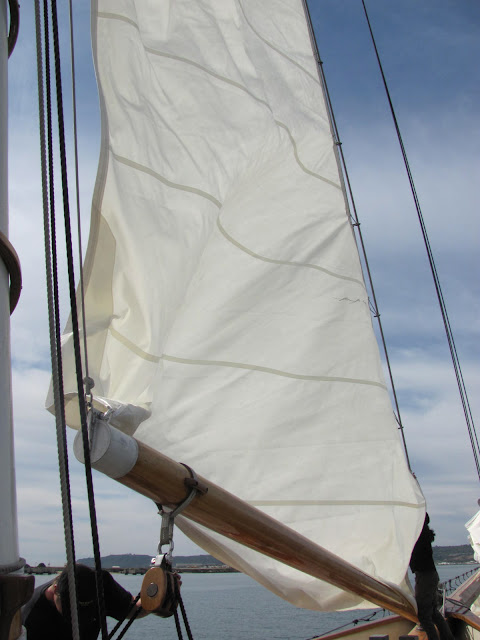 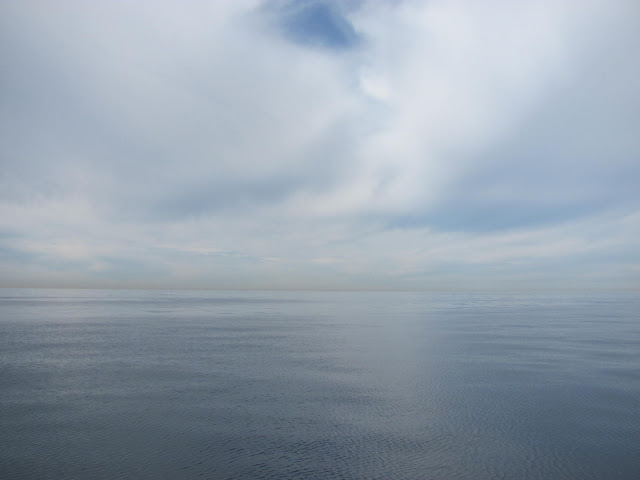 The day was picture perfect with calm water, sun and very little wind.  Not being a sailing person, I didn't realize the implications of being on a sailboat with no wind.  We ended up using the engine all day. 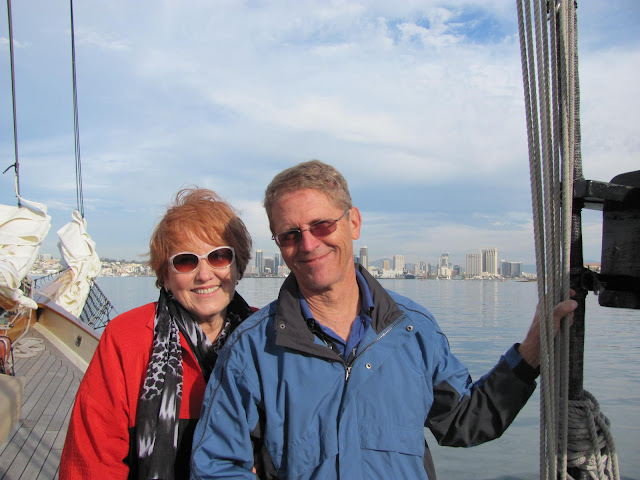 My in-laws.  Aren't they cute?
All of the passengers were put to work looking for whales, but we didn't see any, not even one, DRATZ! Then as we were leaving, we found out they offer a whale sighting guarantee.  If you don't see whales you can get a refund or you can come back.  Luckily it was the first day of our week, so we arranged to come back on Friday. 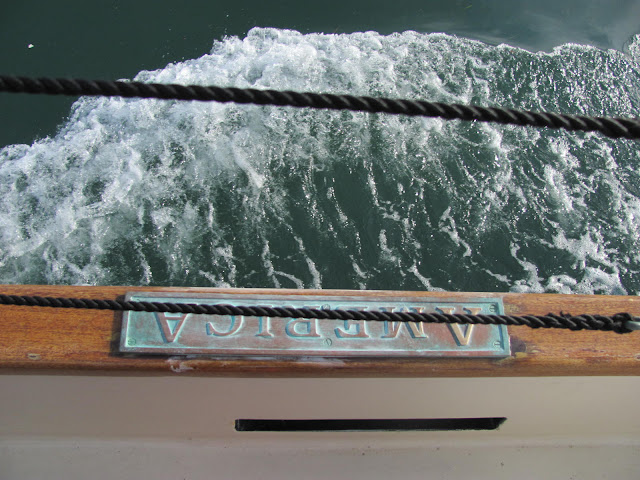 On our next trip out, we had wind and were able to use just the sails.  It was magical, but very, very cold. We brought a picnic lunch with wine.  The ship is beautiful and comfortable and the crew was amazing, even serving blankets and hot chocolate since it was so cold out on the water. 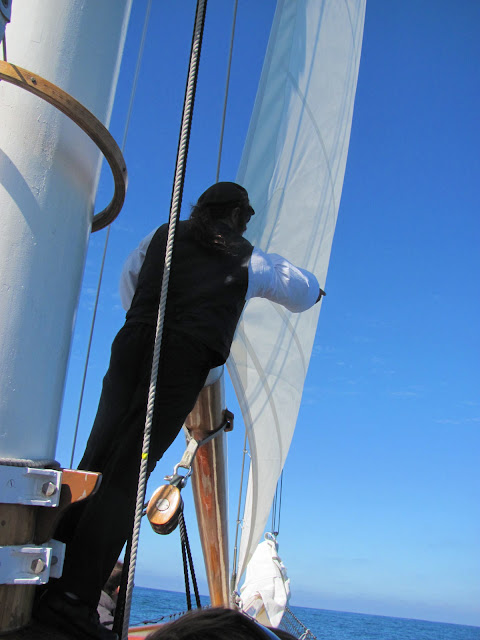 Joe, our whale guide thought he spotted something. 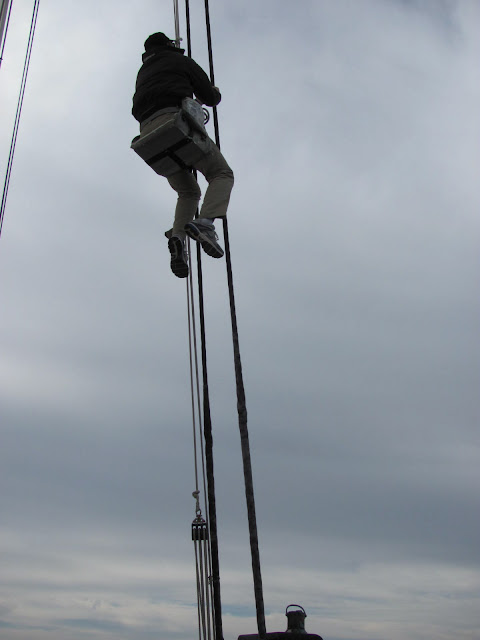 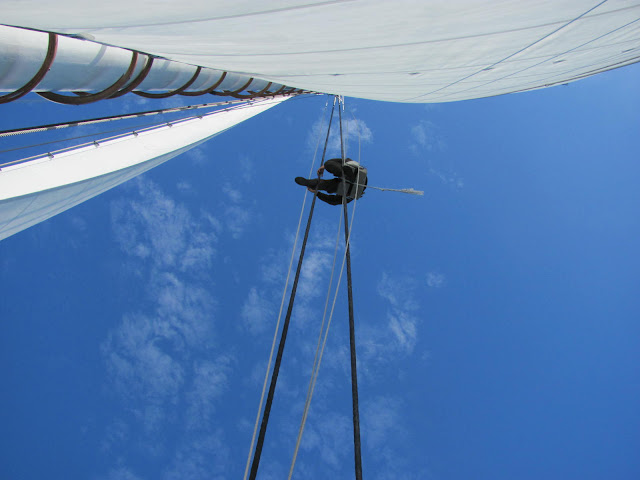 Poor guy, first day on the ship and they send him up there! 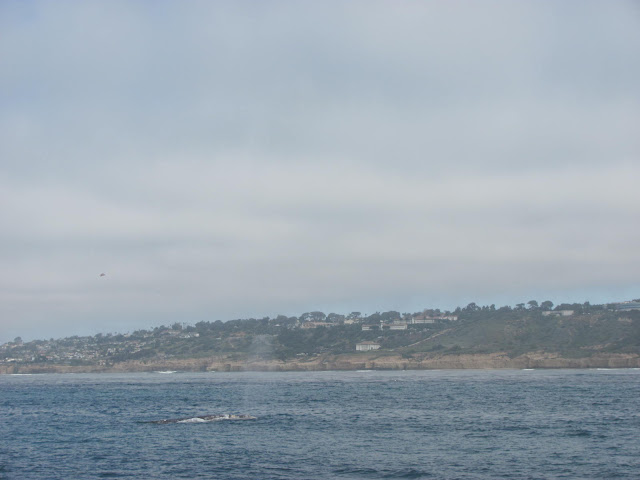 Our whale!  They were the hardest things to photograph!  I was lucky I captured anything at all, but I was thrilled to finally see one. 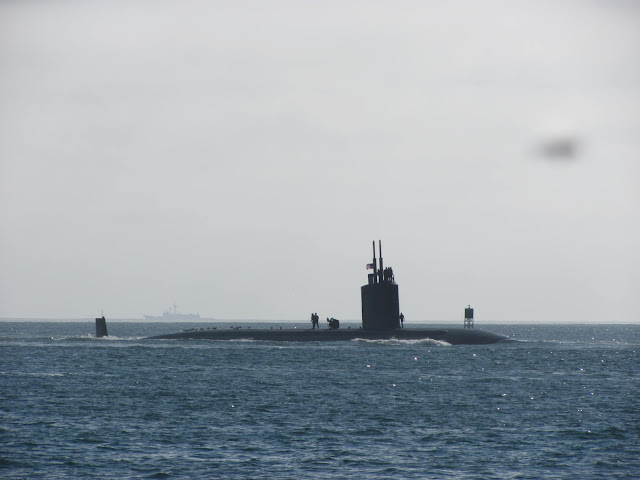 On the way back, we were treated to a nuclear sub coming in for a crew change.  All the ships in the harbor had to move out of the channel and navy police boats patrolled the water with their guns ready. 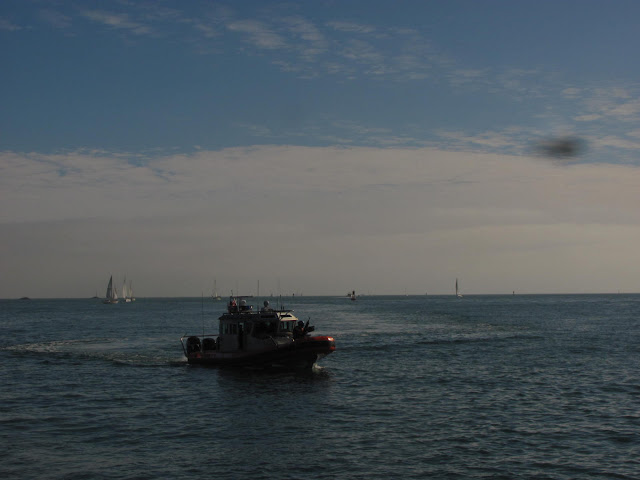 The patrol boat even came to our ship and said we need to move back! 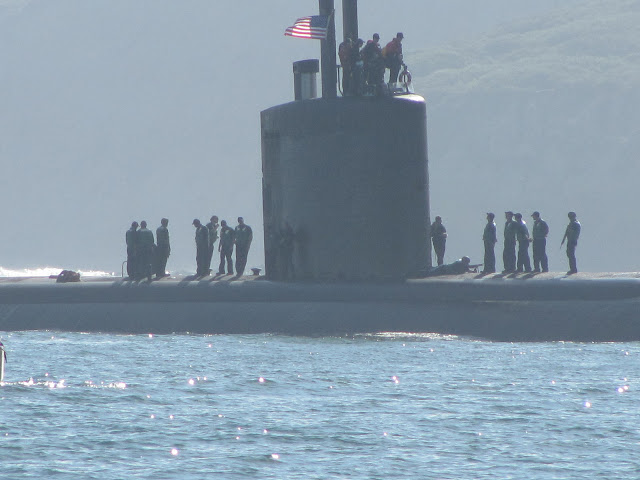 If you look closely you can see the gunner on the deck of the sub too.  They take security very seriously. 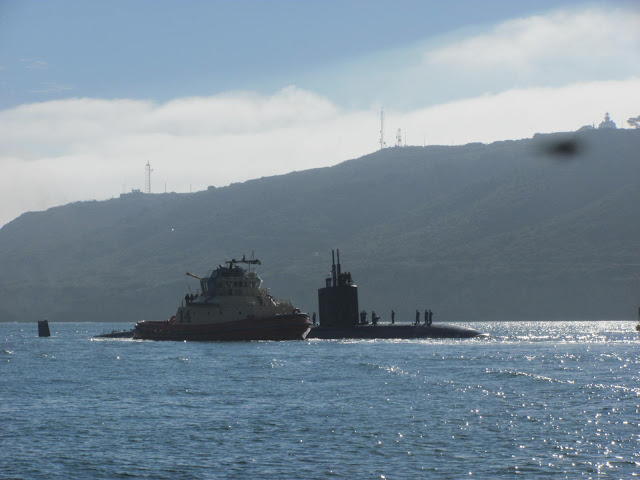 A tug boat pulled aside and we watched a crew change.  It wasn't more than five minutes before the sub was underwater and on it's way back out to sea. 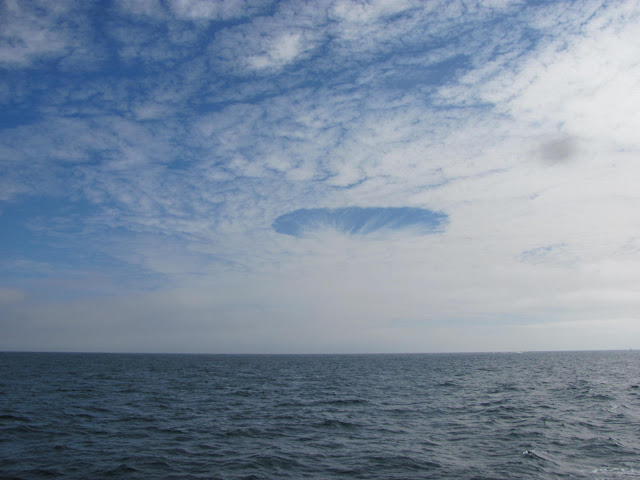 If a sub wasn't enough, we saw a rare cloud formation called a Hole Punch Cloud.  Our captain said we were very lucky to see one.  Something to do with airplanes going through the clouds, ice crystals getting heavy and falling from the clouds leaving a hole behind. 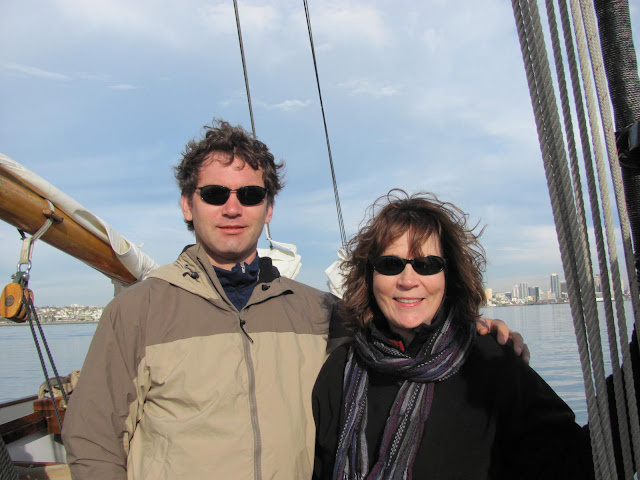 We were so happy we decided to go out a second time. It was a perfect day!  If you are ever in San Diego I highly recommend Next Level Sailing. 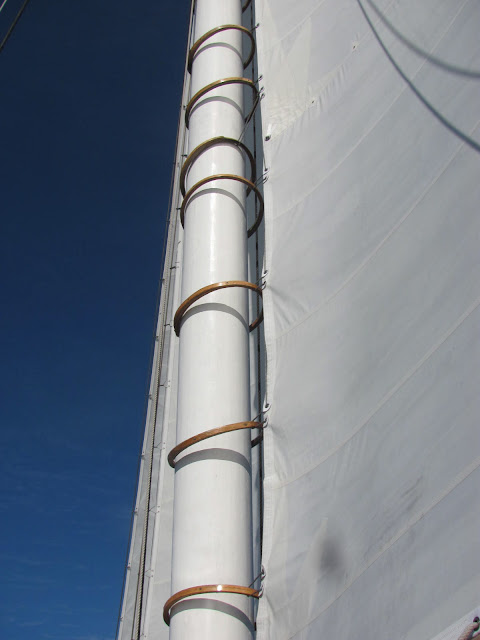 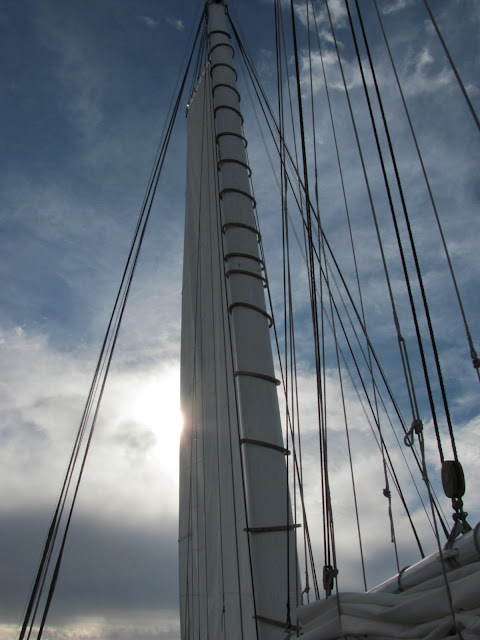 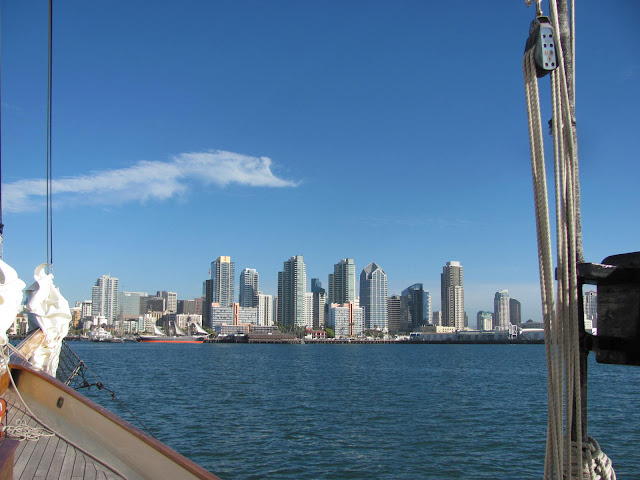 Linking up with Seasonal Sunday
Posted by Dianne at Tuesday, January 29, 2013